In memory of Private Stephen Lazaroff. who was killed in action in Italy, 1944. 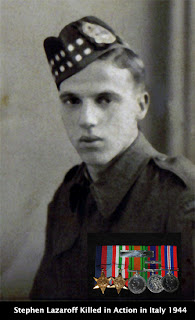 Remembrance Day is a special day for me because I served for 32 years in the Canadian Armed Forces. Every year on the 11th of November, my unit would all fall in for the parade, to pay homage to our brothers in arms, who went off to do their service. Many did not come back, their bodies interred in the battle field cemeteries that are sited throughout the world. Some came home with injuries that would eventually take their life. . Others suffered in silence with mental stress that we cannot understand because we were young and did not know the ravages of war.

Now I am retired.

On the 11th of November every year I put on my military coat and my beret, I pin up my medals, and make my way into the city, to the cenotaph. This day is usually the first real cold day of the season. The wind blows with a bite, forcing us to raise our collars. The ground is frozen solid, making us stamp our feet in order to keep the feeling in our toes. It snows on most Remembrance days, and on some days it would rain. This does not stop us from going. For us, it is a day to remember.

The Remembrance Day gathering is also a time to link up with old friends. Before we would form up for the ceremony, We would wander through the gaggle of men and women, some wearing partial uniforms, others in the legion dress, and sadly many in street clothes that tell of hard times. We would wander about studying the faces of those gathered. Each is searching for someone that they may have served with. Every once in a while walking about, someone would see a face that looked familiar. It may have been a glint in the eye, or the way the lips would turn up in a smile. Sometimes it would be a medal that was worn that told of his service. Most of the gathered would have grey hair. Some would walk with stoop, and others required the assistance of a walking stick or a chair with wheels. I would look at them, and they would peer back. Recognition would result in an exchange greeting, as we tried to remember if it was Corporal Bill Dodds, or was it Lieutenant Dorothy Warner. Sometimes recognition was immediate and the greeting was a warm "How are you doing Jack?" Our eyes would light up when we found old friends.


The reunions were joyous; we would try to jam long periods of separation into a few moments. "Where are you living now? How are the children? I got a bad case of cataracts, or my knees are shot." We would laugh and talk about our grand kids and relate stories about our last trip to the south. There would be a quick shake of hands and a promise keep in touch. Then, we would search out another, and the conversation would repeat itself.

This banter would continue until called to parade. The solemn ceremony would begin and we would all fall silent. Everyone would become an individual thinking of those who died in previous wars, their military service and those who were bravely fighting in theaters of war today.

We would also think of the older veterans who were no longer amongst us. Spaces where they stood with friends now are empty. Many have disappeared. There was one fellow who wore his WWII Khaki uniform with boots, and putties, and full pack. Everybody would shake his hand and complement his dress. He was a reminder to the older veterans of what the young men looked like when they shipped out, in the early days of WWII. Last year I noticed that he was missing.

I always thought that I was one of the younger guys at the parade but last year a young lieutenant came up to me and asked if I would like a chair up front; with a blanket to keep my legs warm, a kind reminder that I am becoming one of the older guys in the parade. I said no thank you; I will stand with the younger crew.

While I am standing quiet I think about my generation of service members. We were fortunate, in that our duty was not as difficult as the Veterans of the great wars and of Korea. My generation served during the Cold War period. We trained and prepared for what I am happy to say, did not materialize. We were the deterrent. Nevertheless, periods of separation from family and friends were difficult. We were lucky because we knew when we would be reunited with our family. Those in the great wars did not know if and or when they would see their families.

Lieutenant Colonel John McCrae's poem "In Flanders Fields."  will echo in my thoughts.

This year when I go the cenotaph, I am sure I will see younger veterans. They carry the medals of Bosnia, Dessert Storm, Afghanistan and other theaters of war. These young people served with pride and they have returned with scars of physical and mental injuries. They will have returned with memories of their brothers in arms who did not.

So when I stand in the snow, the rain, holding my coat against the damp cold wind and the freezing temperatures, I will remember. I will add the fallen and the injured from these wars to all those of previous wars to my thoughts and prayers. And when the Last Post sounds, there will be a tear in my eye. 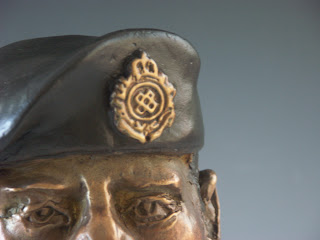 Posted by The life and times of Terrance Frank Lazaroff, CD at 9:29 PM 3 comments: