The Survey about Etsy February 2011

A survey was prepared by zalt57, who is a shop owner on Etsy.
It is anonymous, so the respondents can answer candidly.
The aim of the survey was to try and find out if there was real discontent with Etsy's direction during the past month plus.

It is a short survey but I believe it reflects the feelings of the Etsy members both seller and buyer. The Survey was carried out over a six day period to give Etsy members sufficient time to discover that a survey was underway and to give them the opportunity to participate.
The collection graphs shown below give a visual description of the results. I have made them xlarge for ease of reading.  I am not a statistician nevertheless; I will add my comments where I feel that more information is needed.  Readers are also invited to comment on the results.
The total number of respondents was 812 at the time of this writing. 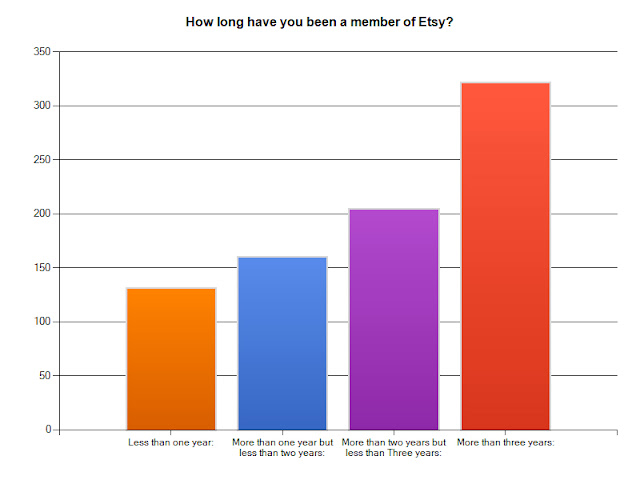 Observation:
Looking at this graph to question number one, I am inclined to say that Etsy has shown a continuous growth over the past three to four years.
It also tells us that approximately 64% of the respondents are members with of two or more years of Etsy loyalty, with 84 percent of the population having one year or more as an Etsy member.  This tells us that the respondents are experienced with Etsy past operating methods.
Recommendation:
The Etsy administration should find a way to consult with the members of Etsy prior to making major changes to the operation structure.  They should be aware that their decisions affect the revenue of a large number of people whom have shown a loyalty to their organization. Major changes without consultation could result in membership loss. 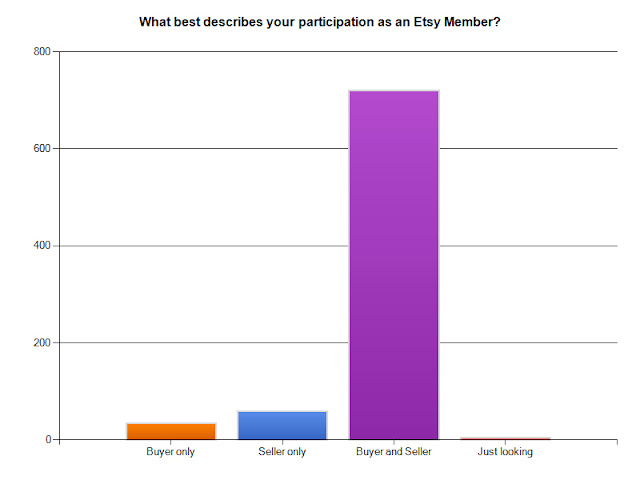 Observation:
The data from question two tells us that 88% of the respondents are both buyer and seller.
This fact points out that Etsy has been successful in developing a synergy of return business. Disruption to this cycle could result in revenue losses to both the Etsy seller and the etsy administration.
Recommendation;
The administration needs to study the interaction of both seller and buyer prior to making major changes to the way of doing business. 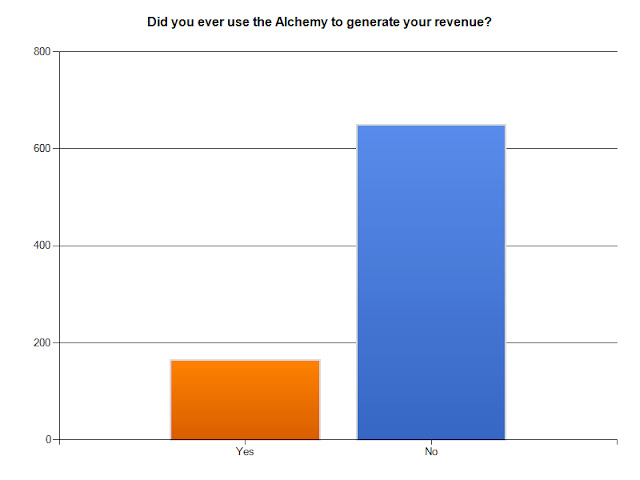 Observation:
Retiring the Alchemy affected about 20% of the population.  This may not seem like a large figure however it does show that there Etsy had cultivated many of if its members to use this tool for revenue generation. It was also a major source for Etsy members to find custom items.  The administration has talked about making etsy more of a social site yet they removed one of the stronger networking applications that were a part of the social life on Etsy.
Recommendation:
The administration should look at reintroducing the Etsy Alchemy application soonest and to make it a major part of Etsy’s marketing devices in order to encourage a great participation of its membership.
One way of increasing the use of the Alchemy would be to have a way for the respondents to be able to present a portfolio of previous Alchemy projects to prospective clients.  Clients would then be able to make a more knowledgeable decision.  There would be a cost involved but this could be recovered though a fair pricing system. 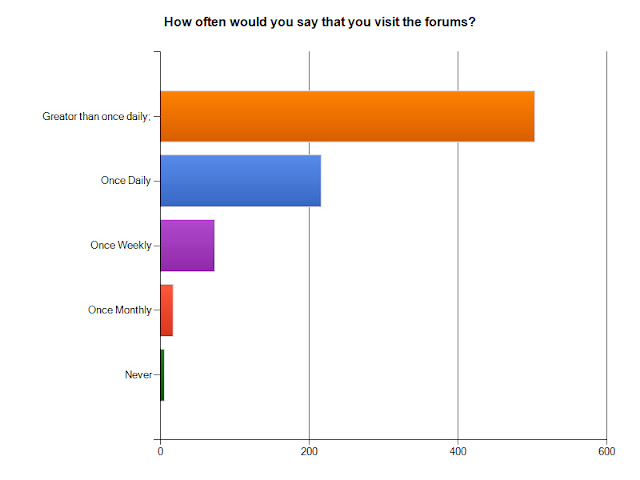 Observation:
The administration changed the Forum structure. They continually talk about making the site more social when they already had a strong social network with the way the forums were set up.  It is evident from the above graph that the previous Forums were visited by the members at least once a week but more often daily.  This was the true social page of Etsy. The changes to the Forums were such that it caused a significant migration of members to what is called the UEF web bulletin board. The social fabric of Etsy was diminished due to this decision.
Recommendation:
Rethink the recent changes to the Forum structure with the possibility for a return to the previous structure. 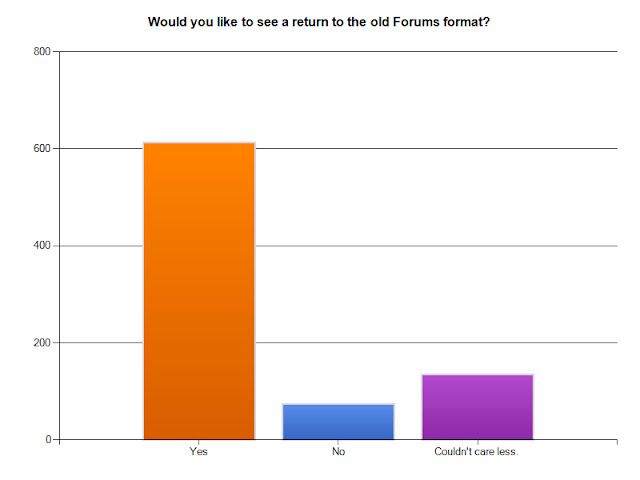 Observation:
The majority of members 75% would like to see a return to the old Forums structure, 9% do not want a return and 16% couldn’t care less.  This graph also helps to confirm that the previous forums were the social hubs of the Etsy members.
Recommendations:
The same recommendations as in question four are suggested. 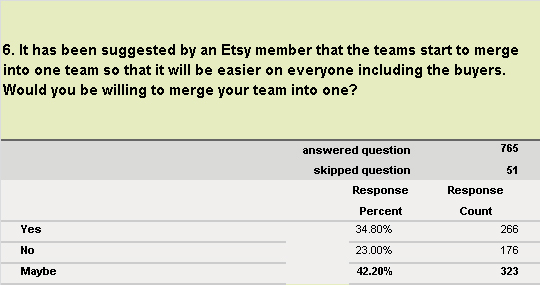 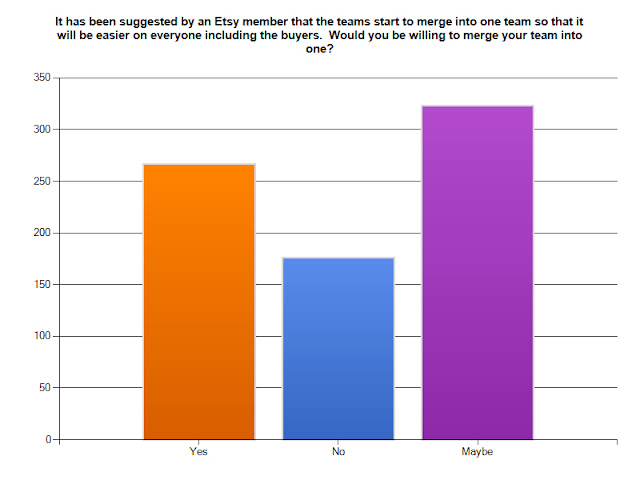 Observation:
It is evident by this graph that the Etsy membership is not fully behind the team structure proposed under the new Forum structure. The membership is trying to figure out how they can best cope with the recent changes.  Combining the yes with maybe tells us that the members are trying to decide how best arrange the new structure to resemble the old forums structure. The discussions on the remaining Forum structures are often diverted to rants about the loss of the old forum. This in turn can cause new members, buyers and sellers, to look at Etsy in a negative light
Recommendations.
Etsy should Re-evaluate their direction with teams and forums. 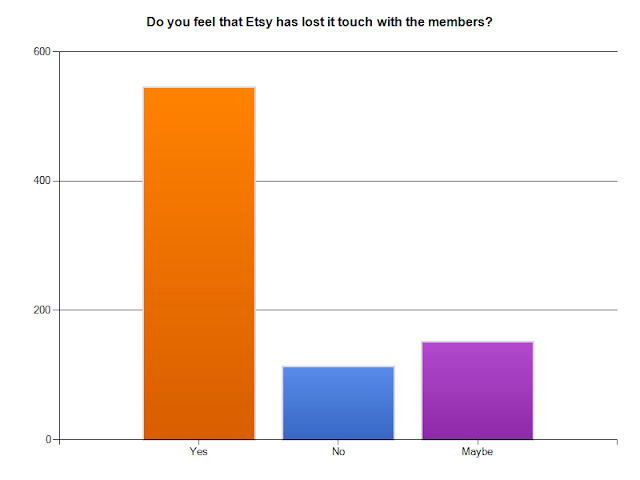 Observation:
The membership believes that the administration has lost touch with them.  The 67% of the members are firm with this response while 18% are undecided.  The figures show that the number of changes taken place on Etsy during the past month have caused difficulties for the members resulting in revenue loss, loss of social interaction with other members and angst about future sales.
Recommendations;
It is suggested that Etsy review their original Aim, Goals, and Strategies in order to ensure they do not lose any more of the trust that they have built up during the past years. 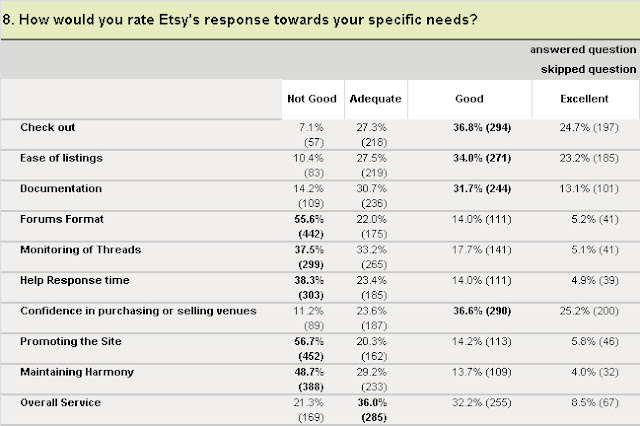 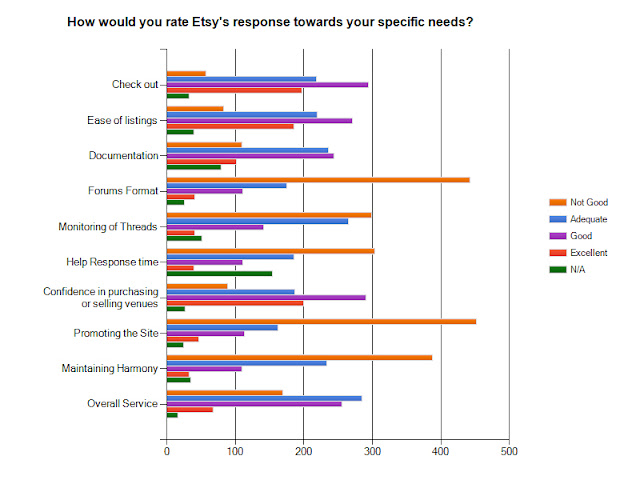 Observation:
The main thrust of this graph shows that the administration has lost the confidence of the Etsy members. The contentious areas are The Forums Format: 56% feel that they are not good, 37% feels that the monitoring of the threads needed improvement, 38% feel that the help response time needs attention due to slowness in getting the answers to their questions, promoting the site shows a very high negative rating of 57% and Maintaining Harmony was also a point that received negative feedback.
The areas of contentment were: the Checkout system, the ease of listings, the documentation, the confidence in purchasing and selling venues and the overall Service.
Recommendation;
It is evident from the above results that there is a better need for the Etsy administration to interact more positively with the members. The social network that is being planned should be packaged in total and proposed to the members for evaluation and acceptance.  The Etsy membership is the revenue generator for Etsy.  They should have some say in major re alignments of the site. 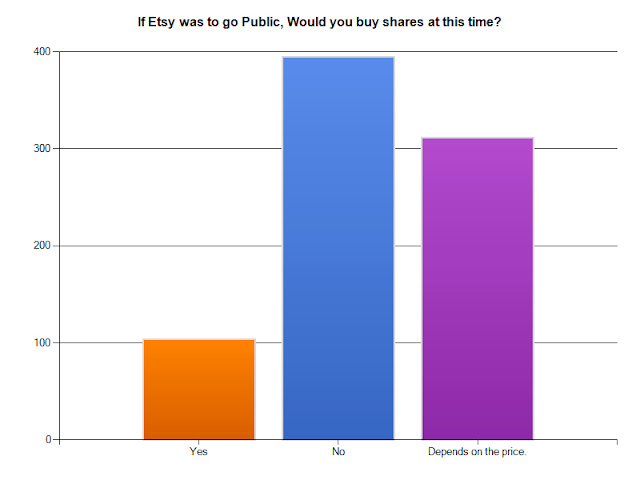 Observation.
This question was proposed in order to find out if there was a real trust in the direction that Etsy was going.  When one is confident of the leadership of a company that makes revenue they tendency to purchase shares in the company increases.  This graph shows that there is about a 50/50 split.
Recommendations;
This information is more for information only.  Nevertheless Esty must be aware that the confidence level is not really that strong amongst the respondents.  See recommendation for question 7. 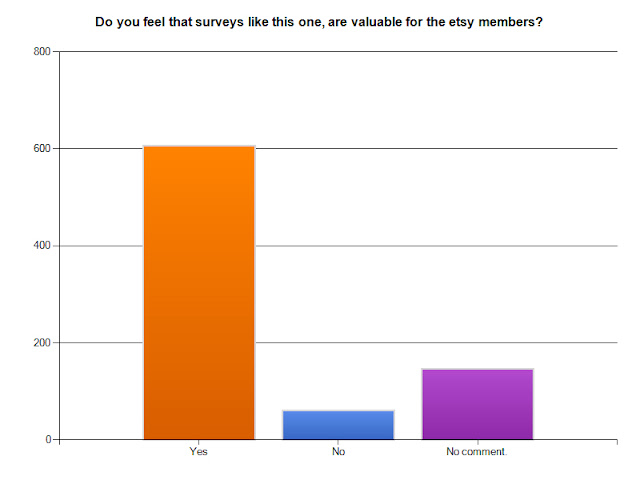 Observation:
This graph shows that there is a strong desire of the respondents to participate in the direction of the Etsy administration.  Etsy is a business and the membership is the partners in this activity. They want their voices heard.
Recommendation;
Etsy administration should run similar surveys from time to time to gauge the feelings of their partners.
Conclusion:
The Etsy Website is a private organization that can make its own decisions and thus disregard this survey.  They would however, benefit from the information in the document before they make any more major changes.
It is also important for them to review their original mandate in order to determine if they have strayed from their original goals.
Please note:
This survey came at an expense in both time and money.  The size of the survey required that I subscribe to the company collecting the data.  If you feel that this survey was important to you and that you wish additional surveys in the future please consider a donation.  The amount is up to you.

Posted by The life and times of Terrance Frank Lazaroff, CD at 12:31 PM