Visiting Xian on the China 2012 tour.


Posted by The life and times of Terrance Frank Lazaroff, CD at 9:40 PM No comments:

If you ever have the opportunity to visit China, be sure to spend at least one full day in Ping Yao. This city is an exceptional tourist attraction. We were there during the festival period, so there were more people than average. Nevertheless, the experience was like stepping back 500 years in time. The rickshaws have been replaced with small cart type vehicles.
The city is a recognized World Heritage Site. I noticed more modern infrastructure and more automobiles within the confines of the walls. The last time I visited Ping Yao there were few vehicles to be found. This time I noticed that cars were parked everywhere. The city did, however, put up barriers to keep the cars at a distance from the pedestrians. The Lonely Planet writes that they feel that it is the best-preserved ancient walled city in China. Sadly I noticed many streets lined with abandoned storefronts and workshops that were boarded up and. I hope that these areas will not be left to decay.
We arrived in the morning. The main gate was clogged with the small carts going in and out carrying tourists. We were told to bring just the necessities as we would be staying for only one evening and that there was little room for baggage on the carts. Wendy grouped us in a gaggle and then went to hire our carriages. It was a very exhilarating time. The tourists were competing with each other trying to hire transport. Others were trying to push to the front of the crowds at the street food vendors. Some were just standing around talking. Most of the men had cigarettes hanging from their mouths. Buses stopped and unloaded their passengers. The atmosphere was a real cacophony of life. I closed my eyes and pictured it when cars and buses did not exist. Wendy brought me back to reality when she beckoned us to climb aboard our carriage. We were soon passing under the arched portal and proceeding in great haste alongside the city wall towards our Auberge. 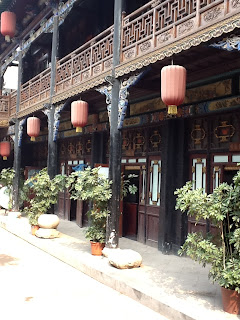 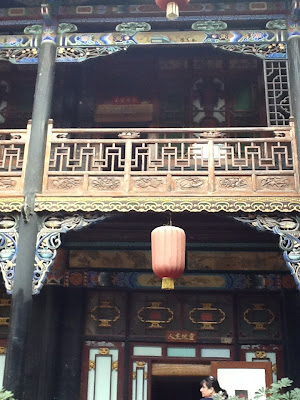 Our hotel.
﻿﻿﻿﻿
We were fortunate.  Wendy had reserved lodgings directly in the center of the action.  There were thousands of people passing the entrance of our inn.  However, once we were in the interior courtyard, the noise seemed to fade.   Our hotel was a courtyard edifice that must have bee 500 years old.  It was beautiful.  Wendy took care of the administration. Once we retrieved our passports and dropped our bags in our rooms, we set about visiting the city.

Ping Yao was a trading center during the Ming era and it became known because the Qing rulers created the first bank and financial institute that allowed for the transfer of fund from one place to another. The money standard at this time was silver, so being able to transfer funds using paper chits was much safer that transporting heavy coinage that could be stolen along the route.
The main attraction of Ping Yao, for most visitors, is the wall. There is a fee to climb and walk it, but it is worth the price. I personally went look at the doorways to the residents. They say that there are around 4000 residencies within the walls. I am sure each home has a unique door entrance. 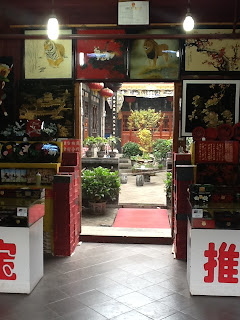 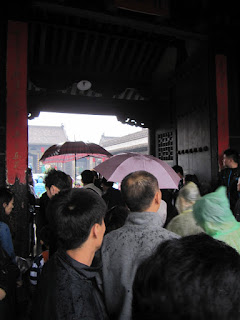 Nan Dajie street
The market street of importance is called Nan Dajie. This street is filled with all sorts of shops, restaurants and bars. Some even have Wi-Fi, so you can sit with a cool beer and write all your friends back home and tell them that you are living in the past. Food is another great commodity that one finds along this street. Our hotel prepared our meals, and we were served in a dining room made with wooden beams that must have been hundreds of years old. They were enormously rounded. We had to climb stairs to get to the dining room. These same stairs allowed us to go higher to the roof. The view was spectacular.
Our hotel food was OK, but I preferred the street food. Ping Yao has it's own food tradition. One of the dishes found everywhere is the Ping Yao noodle dish. The noodles are shaped like the honey comb, and each one is filled with delicious flavours. I personally enjoyed walking about until I found a street food vendor preparing the orders on request. The dish concocted was a bowl of sliced noodles, meat and vegetables. The spices filled the air during the cooking process, causing my eyes to water when the fumes wafted in my direction. The foodstuffs were served hot in a thin, new plastic bag, supported by a plastic bowl. The support bowl was just rinsed in a pail of water. The plastic bag guaranteed a bit of hygiene.
press the start to see the video.
We had a bit of rain. There was just enough to keep the dust down and to bring out the umbrellas.
﻿
The night life in Ping Yao was awesome. They have bars and clubs scattered along the main drags. They were packed with the young new spenders that we see in China today. Some comments about the liquor served made me think twice about ordering a beverage under a high quality label. It seems that some believed that the drinks were watered down or were knock-off brands. It is difficult to ascertain if you only ask for an expensive beverage once in a while. The night life progressed on well into the evening. There were people walking, people shopping, people dancing in the streets. It was a real experience.

Yukari and I initiated one last dash during the evening to do some last minute purchases and to delight in one more look around. I was exhausted when we came back to the hotel, so I had no difficulty falling asleep.
﻿﻿﻿﻿

The morning wakeup call was the loudness of other hotel guests shouting across the balconies. We took our morning meal and gathered into the golf carts and proceeded to retrace one's steps to the bus parking lot. This was not easy as we became gridlocked at the exit gate. People were trying to get in, and people were trying to get out. No one was moving. In the end, a few of us dismounted the cart, grabbed our bags and jostled through the crowds and breached the wall of people and vehicles to break free from the congestion.
We climbed aboard our bus, and we were off to our next destination.

Posted by The life and times of Terrance Frank Lazaroff, CD at 10:32 AM No comments: