﻿
We awoke to a beautiful sunny day. We were in Taiyuan. This city has quite a history. It is an on-again, off-again type city in that it has been conquered and reconquered many times since it was first established.

The area began to see settlement around the 6th century BC. It was first named Taiyuan when it became a part of Qin’s empire in 228BC. The people of Taiyuan were strong they faced many periods of war and conquest.

The founder of the Tang Dynasty came from Taiyuan. Taiyuan has retained its place as a major center down through China's continuous changes of Dynasties. After the fall of the Qing Dynasty Taiyuan became an important center during the warlord periods, 1911-1949. It fought bravely during the Japanese invasion, and the city was one to the last to fall during the Chinese civil war. Wikipedia (http://en.wikipedia.org/wiki/Taiyuan) has a very interesting write about the history of this city.

Today, Taiyuan is an industrial center. This is because to the coal producing mines in the area. The availability of coal has allowed Taiyuan to produce much of the stainless steel required for China's industrial machine. Nevertheless, Taiyuan is a fairly clean city, and it is a good place for tourists to visit. It is also a place for learning as it hosts about 8 universities.

The city is also a center for the film industry for movie sets, because of the well-kept old quarter.
Our first visit on our agenda was to the Jinci Temple. I would say that this was more like a park than a place of worship. There were flowers abounding with small canals and old trees set amongst many bronze sculptures. The main temple building in the park was called the Temple of the Goddess it is considered as the oldest building in Taiyuan. It was constructed in the tenth century. The complex has a natural spring that feeds the small canals.
﻿
﻿

We arrived during the festival period, so there was lots of entertainment for `the park visitors. There was music, singing and dancing. The sound was a bit over whelming. A stage was set up just inside the entrance of the park.
It was suggested that we take a local park guide who could tell about the park , and it's significance. The price was right so we agreed. It was a mistake. The noise of the celebrations overpowered the voice of the guide to such a point that we sent her on her way. Festivals in China are a very noisy affair. Once we passed the stage where the performances were taking place, the park began to quiet down a bit, and we could see why it was considered a place for quiet meditation.
The bronze statue in front of the Temple of the Goddess attracted the attention of many visitors. It was almost impossible to get a photo of it without someone hanging on to it. I was also intrigued by the bronze sculpture of the lion that stood in front of the temple. We can see the mold seams which tell us that it was cast using a complex mold system that was crude but effective.
The  temple park is a great place to take photographs.
﻿
﻿
One of the most interesting parts of this visit was the exit. We had to pass along a path that took us into a gaggle of food and souvenir stands. The smells were delicious. Most of the souvenirs were standard Chinese cultural items. But, you looked beyond the glitz there were some rare and unique items. Our next stop was lunch and then the Shanxi Museum.
The Shanxi Museum is a fairly new building. It opened in 2005, and its collection of Chinese cultural relics was outstanding. The entrance to the museum was an experience in itself. Wide open expanses surrounded a building that resembled a structure that was growing up and outward. It has three floors to explore.
The museum treated its collection as a historical document taking the viewer back to the cradle of civilization. The museum did a splendid job providing visitors with ample documentation about the objects on display I particularly liked the bronze and ceramic collection. I also found the life size installations to be most realistic. We all wondered about snapping photographs of the displays. It was a real gold mine of Chinese antiquity. There were lots of items to see and talk about.
﻿﻿﻿
﻿﻿﻿ 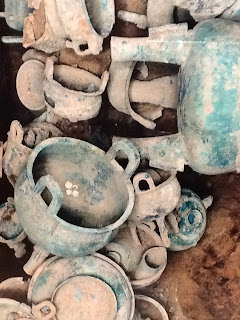 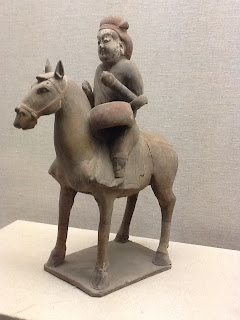 Examples of how artifacts were uncovered in an archaeological dig.
From the museum, we travelled to the Shanxi University to visit Wang Ji Ping and the university studios. I met Wang Ji Ping during one of my earlier visits. His creations range from table top to large scale installations. He was working on a large commission when we arrived; nevertheless, he took time out to offer us tea, coffee, cakes and fruit. We were lucky that Wendy was able to translate our questions. Ji Ping invited us to wander about and explore his studio. It was a treasure trove of fascinating objects. We saw his drawings, his sculptures, his doodles, and some of his personal ceramic antique pieces.
﻿
﻿
Some of the antiques found in Ji Ping's studio
After we completed our exploration of the studio, and exhausted the fruit and cookies that were offered, Ji Ping invited us to visit the main workshop where he was working on his large scale commission. I was awed at what I saw.
﻿﻿﻿

﻿﻿﻿The sculptures were depictions of Chinese Cultural characters. I have never seen a clay model at large as those under construction. They were about 5 meters high. It was really something to walk amongst the scaffolding built up around these clay objects. I felt that I was in the land of Gods. I questioned what they weighed, but it was lost amongst the excited chatter of the group. I also wondered how they were going to move the pieces. I have never seen clay work on this scale. He had a team of artists working with him. The studio was a beehive of activity. Ji Ping explained his process and showed us his model on how the elements of the sculpture would look when finished.

Ji Ping also mentioned that his son would be attending University in Montreal, Canada in 2013 and that he also may be coming to Montreal during the year. I will find out his schedule and be sure to organise a dinner party to welcome him.
Posted by The life and times of Terrance Frank Lazaroff, CD at 9:05 AM No comments: